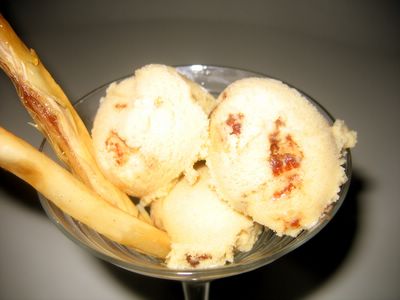 The sweet-loving Nic at Baking Sheet has proposed a great theme for this month's SHF- Honey. I was looking forward to making an SHF entry that was a frozen treat and honey offered a perfect opportunity. In my quest for a light frozen honey dessert, I came across a honey gelato in Cooking Light. Using honey in ice creams and gelato is probably the best way to enjoy the flavor nuances of honey, without the cloying sweetness. I used Kamahi honey, a very buttery honey from New Zealand.

Honey is the only sweetener in this gelato. The idea of using evaporated milk and dry milk sounded a little ahem, yucky but the end result was more than worth it. I took some inspiration from the spices in baklava and steeped cinnamon and cloves into the scalded milk.

I added some crunch to the gelato by adding some chopped spiced, roasted almonds and pistachios (the kind of treats that make the rounds during the Holidays) making it very baklava-ish. Some filo pastry sticks filled with cinnamon and soaked lightly in honey-spice syrup gave a lot of crisp texture and served as munchable spoons.

Pour mixture into ice-cream maker and freeze. Just before the mixture hardens up, add a couple of handfuls of chopped nuts and run ice cream maker for another 2 min. Spoon gelato into a freezer-safe container. Cover and freeze 2 hours or until firm.

Layer sheets brushing each layer with melted butter and dusting with cinnamon-sugar. Cut the sheets into 8 thin sticks. Roll each stick slightly to make them rounded. Bake at 350 F for 8-10 min until golden brown.

While they are warm, brush them with a cooled syrup made of equal parts of sugar, honey and water that has been flavored with whole spices and orange zest.
Posted by Mika at 6:09 AM

Me, Myself and I